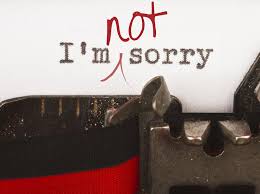 We know that abusers are never wrong. The kind we deal with here. Even when they admit some wrong or blame, they don’t really believe it. It’s just a sham to further deceive others. “But he said he is sorry.” It’s like a line I heard in Iron Man 2 recently – “I’m sorry. It was your fault, but I’m sorry.”

All this evidences to me that these kind of people have a disconnected circuit in their brain. Oh, don’t cut them any slack due to some physical glitch in their brain. This doesn’t excuse them at all. In fact, the disconnect I am talking about is, I theorize, the very product of their ongoing lying sin.

If you talk to someone whose life is a train wreck and that wreck has obviously been caused by their own doing (alcohol/drug abuse, slothfulness, lying, abusing others, etc) you will often find that they seem absolutely blind to the cause and effect. That is to say, they will not acknowledge to themselves or to anyone that the reason their life is the disaster that it is is the result of their own doing. “My wife is divorcing me, but I don’t know why. She is just so hateful and refuses to forgive me even when I have said I am sorry. I mean, I’m not perfect but neither is she.” All this from a man who has committed multiple adulteries, kept his wife in economic poverty, lied about her to friends and relatives, and so on. But he will NOT connect his wicked actions to the effect: the demise of his marriage and family.

You will see it in prison inmates quite often. Here they are, convicted felons, and yet what is the reason? Everyone told lies about them. It was a rigged court. The judge was prejudiced. The cops were out to get me. And on and on it goes. They will NOT acknowledge that the reason they are behind bars is because of their own crimes.

This is one reason that lying is such a horrid sin. We must deal with it in our children VERY early on in their lives – as soon as we see it evidenced. They must be taught to connect their sin with the consequences and not get away with making excuses or telling lies. Because if we let them persist in a lying pattern they are building a real fortress in their mind that may be impossible to be demolished in years to come.

Local churches are supposed to be…..well, let Paul tell it:

1Ti 3:15  if I delay, you may know how one ought to behave in the household of God, which is the church of the living God, a pillar and buttress of the truth.

The temple of God – which is what we who are in Christ are – is to be a pillar of truth. Truth is to be in the air we breathe, it’s light is to shine all around us. Local churches must be places where lies are exposed, not enabled and covered up. We must cultivate the Spirit’s urging in us that the father of lies is not going to be permitted to sit in the pews with us. Because if we permit lies to parade as truth, if we permit liars to come in among us disguised as sheep, then we are going to encourage this circuit breaking in the minds of others, especially in the minds of the young.

8 thoughts on “The Disconnect in the Evil Man’s Mind”