It is actually reported that there is sexual immorality among you, and of a kind that is not tolerated even among pagans, for a man has his father’s wife. And you are arrogant! Ought you not rather to mourn? Let him who has done this be removed from among you. (1Co 5:1-2)

As we have seen in this series of posts, local churches are giving standing ovations to unrepentant (or falsely repentant) wicked people. As you can see from the verses quoted above (which I quote very, very frequently), this is the very same sin that was pervasive in the church at Corinth. Boasting about how “merciful” they were, pronouncing a grossly evil man among them to be one of the saints. Paul nailed them.

Here then is still another instance which took place recently. Once again, in the absence of any repentance, people walking in sin who claim to be Christians were give a hearty round of applause from the congregation. This is how it went down:

An unmarried couple who have been living together for quite sometime have several children. They profess to be Christians and have been attending the church regularly.  After meeting with another “mentor” couple, also members of this church, the couple appeared on the platform of the church sanctuary at the Sunday morning worship service. The man got down on his knee and asked the woman to marry him. She accepted and a ring was given….and the whole place burst out in applause. No mention of sin. No mention of repentance.

Now, not only is there the issue of fornication, but it turns out that this fellow has been in jail several times this past year. Professing Christian. Living in sexual immorality. Committing crimes. He did mention to the congregation that he had had “a difficult year for him.” To which the pastor replied in front of all, “This is what God’s grace is all about.” Applause.  Shouts of “that was so beautiful!” That pastor, in his sermon, went on to chastise “nit-picky” Christians who are ungracious and unforgiving.

Now, if you have experienced abuse at the hands of the typical conscienceless, deceiving, sociopathic abuser, red warning lights are going to be going off in your head already in regard to this man. It is quite probable that this church just handed this woman over to an abuser, serving as his ally in evil. And the pastor and church are culpable. They are guilty. They are arrogant and they are presenting a false gospel. They are pronouncing a wicked man, who has been walking in habitual sin, to be justified and righteous in God’s sight. In addition, other abuse victims who are sitting out there in the pews will be further enslaved, confused, guilted, and shamed by all of this.

Do you realize that a wicked, evil person – even the devil himself – can easily stand up in front of a church audience and weep and wail in fake repentance, pleading for forgiveness, “confessing” his sin, and all the while be lying in every single word he utters? But, you see, so many people today who sit in church pews and claim the name of Christ for themselves, love this message of cheap forgiveness. Why? Because they know that if this is true —

Whoever says “I know him” but does not keep his commandments is a liar, and the truth is not in him, (1Jn 2:4)

–then they stand condemned before God and their claim to Christ is false.

Go back to Part 2 of this Series

I am the pastor of Christ Reformation Church in Tillamook, Oregon, arriving here in 1993. I have been a pastor since 1983 and was a police officer for 12 years before that. My wife and I have been married since 1971. Verla is a medical assistant at a local clinic and in our spare time we like to hunt, fish, and ride our motorcycle. View all posts by Jeff Crippen

The Lord’s Rejection of Popular Ministry 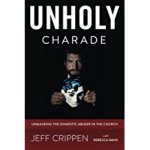